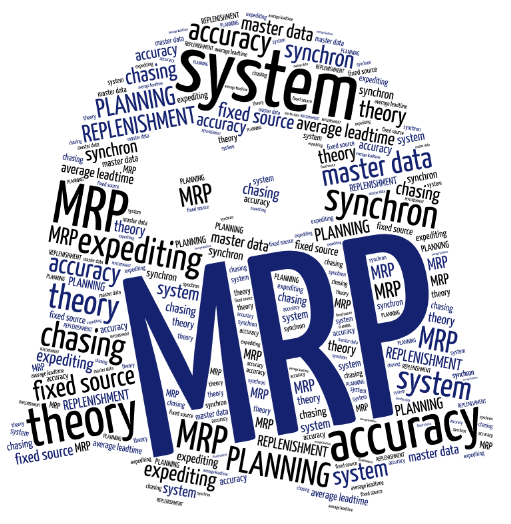 Manufacturing Resource Planning (MRPII) is the most widespread planning method in the world. MRP and then MRPII were developed in the 1970s. It requires demand forecasts and plans all the manufacturing activities: it is a push flow method. MRPII is “a method for the effective planning of all resources of a manufacturing company. Ideally it addresses operational planning in units, financial planning in dollars, and has a simulation capability to answer what-if questions. It is made up of a variety of processes, each linked together: business planning, production planning (sales and operations planning), master production scheduling, Material Requirements Planning (MRP), Orlicky (1975), capacity requirements planning, and the execution support systems for capacity and material. […] Manufacturing Resource Planning is a direct outgrowth and extension of closed-loop MRP”, Apics Dictionnary (2008). The general market behaviour has evolved in the last 30 years generating more instabilities of the demand, of the supplies and of internal processes. These variabilities result in creating more difficulties to establish accurate forecasts, generating nervousness in MRP behaviour what is a bullwhip effect source, Lee et al. (1992).

The Demand-Driven MRP (DDMRP) is a method for managing flows in manufacturing and distribution that is supposed to manage uncertainties better than traditional Manufacturing Resources Planning (MRP) using some principles of pull approaches.

“DDMRP is a multi-echelon demand and supply planning and execution methodology.” It is developing since 2000 and is already set up in some companies in the United States. Furthermore it generates an increasing interest of industrial managers and researchers. Its main originalities are in the strategic DDMRP buffer positioning, dimensioning and execution replenishment policies so that the different sources of variability (from supply, operational, demand and management) can be managed. Therefore, DDMRP is said to combine best practices of MRPII, Wallace (1984), Lean, Ohno (1987), Theory Of Constraints (TOC), Goldratt (1990), Distribution Resource Planning, Martin (1985), 6 sigma, Deming (1993)  and with some innovations. But there is no scientific comparison to objectively demonstrate differences between managing flows with DDMRP or MRPII and other pulling methods such as Kanban, Ohno (1982) or ConWIP, Spearman (1990) (Miclo et al, 2016).